on January 03, 2020
Marvel Super War mobile MOBA by NetEase Games has been around for quite some time now. The new mobile MOBA generally receives positive reviews from players and many are can't wait for new Marvel characters to be available on the battlefield. However, the game is not yet available in other regions.
But did you know that this is not the first time that a gaming company wanted to create a MOBA based on popular superheroes? Back in 2016, Tencent Games wanted to release an international version of their mega-hit mobile MOBA game Honor of Kings. Tencent's video game developer TiMi Studios started developing the game and one of their key element to attract international players  is to reskin the heavily Chinese culture theme of the game and to add popular super hero characters. This lead to Marvel Comics and Tencent Games collaboration to create Marvel Super Heroes. The game features Marvel Comics superheroes and Tencent on the other hand, added there owned unique heroes as well.
Whatever the reason is, Marvel Super Heroes didn't made it further and Tencent Games ended up collaborating with DC Comics. Tencent didn't stop pursuing for an international adaptation of Honor of Kings and rebranded the international version of the game as Strike of Kings. Compared to Marvel Super Heroes, Strike of Kings features a lot of unique heroes and just five heroes from DC Comics universe. Garena is also involve in the game and adapted hero designs from there acquired PC MOBA game from S2 Games' Heroes of Newerth.
Here are some HoN heroes that adapted in the game. Big thanks for a2zei for this compilation. Check his channel too for more mobile MOBA comparison videos specially Mobile Legends: Bang Bang.
Before Strike of Kings was released in global Tencent server, SoK was rebranded as Arena of Valor. On the other hand, Garena and Netmarble uses different titles of the game like ROV (Realm of Valor) in Thailand, Liên Quân Mobile (Mobile Arena) in Vietnam, Legendary Showdown in Taiwan and Penta Storm in South Korea. Meanwhile, Other servers prefer to use AOV/Arena of Valor title.
And for Marvel Comics, they collaborated with NetEase Games to create Marvel Super War mobile MOBA. Compared to Tencent version, Marvel Super War features Marvel Comics-only characters.
Check out the Marvel Super Heroes spotlight by V.K YouTube channel.

As I mention earlier, there are non-Marvel heroes from the Tencent version and later became champs in Arena of Valor. These characters are known as Butterfly, Violet, Zanis, Mina, Valhein, Sun Wukong, Toro and Lu Bu. If you're an Arena of Valor player, you probably notice the kid with a giant stuff toy in the video. And if I'm not mistaken, she is based on the original version Angela of Honor of Kings which later became Natalya in AOV.
Arena of Valor Heroes of Newerth Honor of Kings MARVEL Super War MOBA NetEase News Tencent 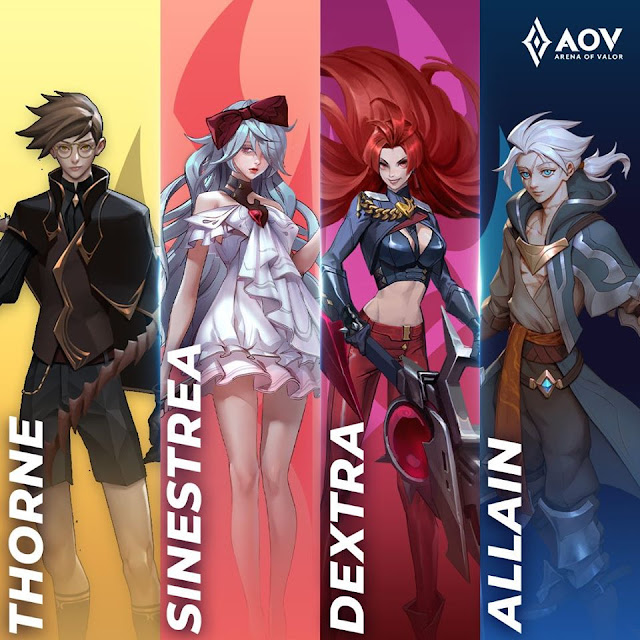 Image Source: Garena AOV Facebook Page Arena of Valor has finally revealed the fourth member of Shadow Hand faction Dextra . AOV's latest hero will be a warrior/tank type hero and just like many speculations, Dextra will have a special connection with Sinestrea . An interesting twist that will change your strategy throughout the game.  Before we revealed her special connection with Sinestrea, let's go over first with her unique skill kit. Take note that the description we gather right now is not yet available in the English language and mostly translated from AOV's test server in Vietnam. Dextra's passive ' Blood Heat ' gains a 1% increase in physical attack each time she hit an enemy hero. She can stack up to ten times each time she hit an enemy hero but cannot exceed 20 stacks.     Going over to her first skill called the Reincarnation Saw , Dextra ables to accumulate power and can run at full speed over a short period of time by dragging the Blood of the Sa