What Mobile MOBAs to Practice With Before 'League of Legends: Wild Rift' Release?

Mobile Legends: Bang Bang is one of the most popular mobile MOBA right now, especially in the Southeast Asian market but in terms of game style, they have a huge difference to League of Legends: Wild Rift. I will still recommend this game despite huge differences to Wild Rift because it's simply they have huge and active daily players. It's a great way to start introducing MOBA PC players to mobile MOBA. But if you want a game that is really similar to Wild Rift, just wait a little bit.


As you can see, Wild Rift and MLBB have big differences in lanes and roles. The jungler is simply don't have an important role in Mobile Legends. During early games, anyone can take the buff they believe they need. If you're a jungle role in LOL PC and play ML, don't be surprised or pissed off when someone steals the buffs, that's how ML play with. MLBB has different formations and most players are doing a one-three-one formation. Fighter hero usually soloes on Top Lane while 3 heroes mainly Marksman, Tank, or Jungle work together in the Mid Lane.  In Bot Lane, anyone can solo here except for support hero.

Arena of Valor is another popular mobile MOBA in Asia and is created by Tencent Games' developer TiMi Studio (Call of Duty Mobile, Pokemon UNITE). League of Legends: Wild Rift is pretty much similar to Arena of Valor lanes and roles.

AOV's Dark Slayer Lane (DS Lane) is simply the Wild Rift equivalent to Baron Lane. A tank or a fighter usually soloes on this lane. Mage always situated on the Mid Lane but there are non-Mage heroes who can also solo on the Mid Lane. The Dragon Lane in Wild Rift and Abyssal Dragon Lane (AD Lane) have huge similarities and Marksman/Archer always positioned on this lane along with Support/Tank heroes. A LOL PC player who always a Jungler will never pissed off when playing AOV cause they both share similarities but there's a catch. If you play AOV on the MSPI region where most players are also playing MLBB, there's a tendency that you might encounter a player who carries there ML game style to AOV.
There's another game that is also similar to Wild Rift only if you're from Mainland China. Honor of Kings is another mobile MOBA of Tencent Games. If you're from Asia, you can still play the game and you won't get bored waiting for a match because they have the biggest player base of mobile MOBA right now. There's an English language option too for non-Chinese players. 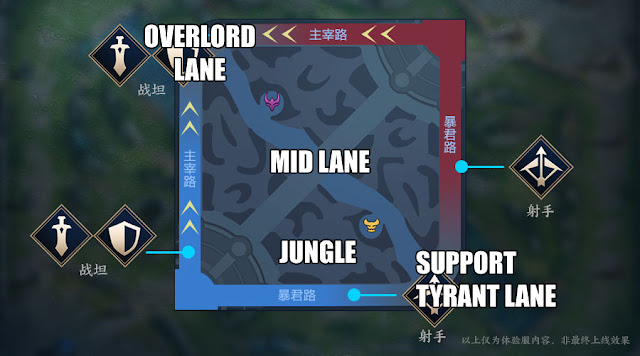 If you aren't comfortable playing these games there are other mobile MOBA that are available on App Stores today. Onmyoji Arena, Marvel Super War, and Vainglory are also close enough to Wild Rift but the only problem with these games as they aren't enough users to compete with.
5v5 Arena of Valor Honor of Kings League of Legends MOBA Mobile Legends